Many travelers have enjoyed gorilla trekking safaris in Uganda Congo and Rwanda however, their complaint is that they are restricted to only an hour with the gorillas yet they would love to interact with them more. Now here is a tip for you! Don’t fall victim, As you plan a gorilla trekking safari Congo, don’t miss out on the most satisfying moment with the gorillas; Gorilla habituation safari Congo to Kahuzi Biega National Park. Gorilla habituation Congo safari experience has no actual definition but it is actually the act of interacting and training wild gorillas to become used to the sight of people. Gorilla habituation experience involves a number of groups of people like the gorilla trackers, conservationists, researchers and rangers among others. This experience takes a period of about 2 to 3 years.

The people involved in gorilla habituation get to understand the gorillas deeper and individually, know their behaviors and even get to the point of naming every single one of them. In the end, if the researchers are certain that the wild gorillas are okay with the presence of people, a mock exercise is done as a way of testing to prove their facts. When the gorillas pass this kind of exercise which now includes journalists and scientists, the gorilla group is then available for trekking.

This experience only restricts tourists to a maximum of 4 each day. Thus, permit bookings for the Congo gorilla habituation experience should be done like 6 months prior the actual habituation day especially during the months of December all through to March and July to October.

Ever since gorilla trekking safaris Congo were started in Kahuzi Biega National Park Congo, there are now over 6 gorilla families that tourists go to track. However, tourists have always been given 1 hour to interact with the gorillas on their Congo gorilla safaris. The 1 hour restricted is to protect the gorillas from getting used to humans and for the fact that they are shy, they don’t want to be around people for long. However, tourists have never found this 1 hour enough to be with the gorillas.

About 150 people were missing after a boat sank in an eastern lake in the Democratic Republic of Congo, President Felix Tshisekedi said on Twitter on Tuesday, a day after the vessel went down. “I express my sincere compassion to the families who have suffered. The disaster happened Monday evening, but details of the incident were only just emerging Wednesday.

The boat set off Monday from the village of Kituku, near the city of Goma on Lake Kivu’s northern shore, and sank in South Kivu Province near the territory of Kalehe. Many of the victims were believed to be traders who make the journey each week.

Vital Muhini, the national deputy from South Kivu Province, said the cause of the sinking was unknown. “For the moment, we want to have the exact number and the names of the victims who have embarked on this boat,” Mr. Muhini said.

Vital Muhini, national Deputy from South Kivu province told CNN on Wednesday that 37 people have been rescued so far and three bodies were recovered from the site of the sinking.

Muhini said the overloaded boat departed from the port of Kituku in Goma in eastern Congo when it capsized into the lake in South Kivu province.

Early investigations into the disaster revealed that passengers were not wearing life jackets and a passenger manifest was not available to account for the total number of people on board the boat, Muhini said.

“It’s unfortunate to find that people travel aboard a small boat and there is not even a manifest, with a heavy cargo of goods. The people had no life jackets, … which calls for the sanctions of all the perpetrators who contributed to this sinking,” Muhini told CNN.

Fatal boat accidents frequently occur along waterways in the Democratic Republic of the Congo, on the Congo River and on the country’s lakes, where water is a primary means of transport for residents outside its major cities.

The country sacked its transport minister after a string of accidents along its waterways in 2011 in a move to tighten safety issues in the sector. More than 100 were declared missing after two boats collided on the Congo River in 2015, according to the World Health Organization.

The agency said passenger boats often sink in the country due to the age of the vessels and their failure to follow rules of navigation.

About Lwiro Chimpanzee Sanctuary in Congo

This sanctuary was created in was founded in 2003 with the arrival of its first orphan chimpanzee. It was created by 2 Congolese institutions that is Congolese Institute for Nature Conservation (ICCN) and National Center for Research in Natural Sciences (CRSN). As the only chimpanzee and monkey sanctuary in the kivu region, the Lwiro acts as a crucial resource for all conservation organizations working in the area.

Since its inception Lwiro Chimpanzee sanctuary currently takes care of about 83 chimpanzees, 105 monkeys of 12 different species along with other endangered species like the parrots, turtles and a porcupine. Lwiro plays a vital role in caring for confiscated wildlife and in putting a stop to the illegal animal trade in Congo.

This sanctuary gives orphaned chimps a second chance at life while also ensuring to protect them in the wild as well. Many chimpanzee families are killed and the young ones are left stranded and that is when Virunga National Park, Kahuzi Biega National Park Congo, and other rescue teams come in to take the stranded orphan chimpanzees to their safe home at the sanctuary to help them recover physically and psychologically from what they had witnessed as most of them see the action of poachers on their families. NGOs have also joined the fight to see this sanctuary as a success. Lwiro is the ideal location for chimpanzee rehabilitation, local community awareness for conservation and outreaches.

Lwiro Chimpanzee Sanctuary is recognized as World Heritage Site in Danger since 1997. This sanctuary has a great well-equipped team of about 46 workers who take care and love the primates. There is a veterinary team, chimpanzee caregivers, monkey caregivers, cooks/ chefs, buyers and domestic helps who are also dedicated to the success of the center. The caregivers at Lwiro Chimpanzee Sanctuary are all skilled and well-trained personnel and some have been at the center since it was established in 2002 with the first chimpanzee. The cooks ensure a well-balanced diet for each of the animals at Lwiro and all the six meals per day that the Chimpanzees and monkeys eat unlike humans who survive on 3 meals per day.

The team of 2 veterinary doctors has been the backbone of Lwiro as they work day and night to ensure the health of the primates at the center. As there are both monkeys and chimps at the center, they both have their separate team of caregivers who spend the most time with them, monitoring, loving and ensuring the chimpanzees and monkeys in Lwiro Chimpanzee sanctuary receive the best care and utmost attention.

Opt to visit Lwiro Chimpanzee Sanctuary after enjoying your Congo safari or before your Congo Safaris.

The programs at the center have reached a big audience of about 3500 people per year through the several visitors both international and local that come to the sanctuary.

This amazing Volcano is 20km north of Goma town (capital of the North Kivu province in the Eastern DRC) and just west of the border with Rwanda. From 1882, Mount Nyiragongo has erupted at least 34 times. In 1977, there was an active volcanic activity when the walls fractured and the lava lake drained in one hour creating the fastest lava flow recorded (40mi/h). Mount Nyiragongo is one of the recent active volcanoes and for this uniqueness many are always daring to hike Mount Nyiragongo and never have they been disappointed, the lava and hike experience are 2 different and memorable Congo safari activities. 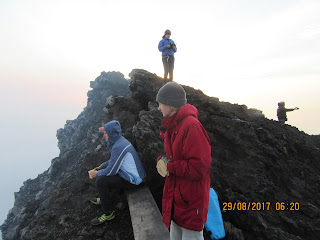 A hike to Mount Nyiragongo is briefly a single day Congo tour hike and a single day descend with a night spent at the summit.

You can decide to take the Nyiragongo volcano hike either as a stand-alone trip or tailor it with a Congo gorilla trekking safari to Virunga National Park. One can also opt to tailor their safari with a Uganda wildlife safari during an extended or long safari.

For a Mount Nyiragongo trek, you arrive from your destination probably Kigali International Airport which is the closest airport with daily flight then transfer to Goma town.

On the first day of the trek, you are expected to be at the hike start point by 8:00am Congo local time.

The ascent up the volcano starts at around 10:00am with most climbing groups reaching the summit by 5:00pm. The trek is split in to five legs, so you get four rest stops of about 20 minutes each as you regain your strength and collect your breath. On arriving at the summit, you will spend the night on the crater in small summit cabins just enough for your rest through the cold night.

Early morning before sunrise after taking memorable pictures of the lava at the summit, by around 6:00am getting you then start the descend back to the hike start point going through the steep rocky trail.

In case you need help with the hike and your luggage, hiring a porter at a fee is the best option.

Click here to assign a widget to this area.